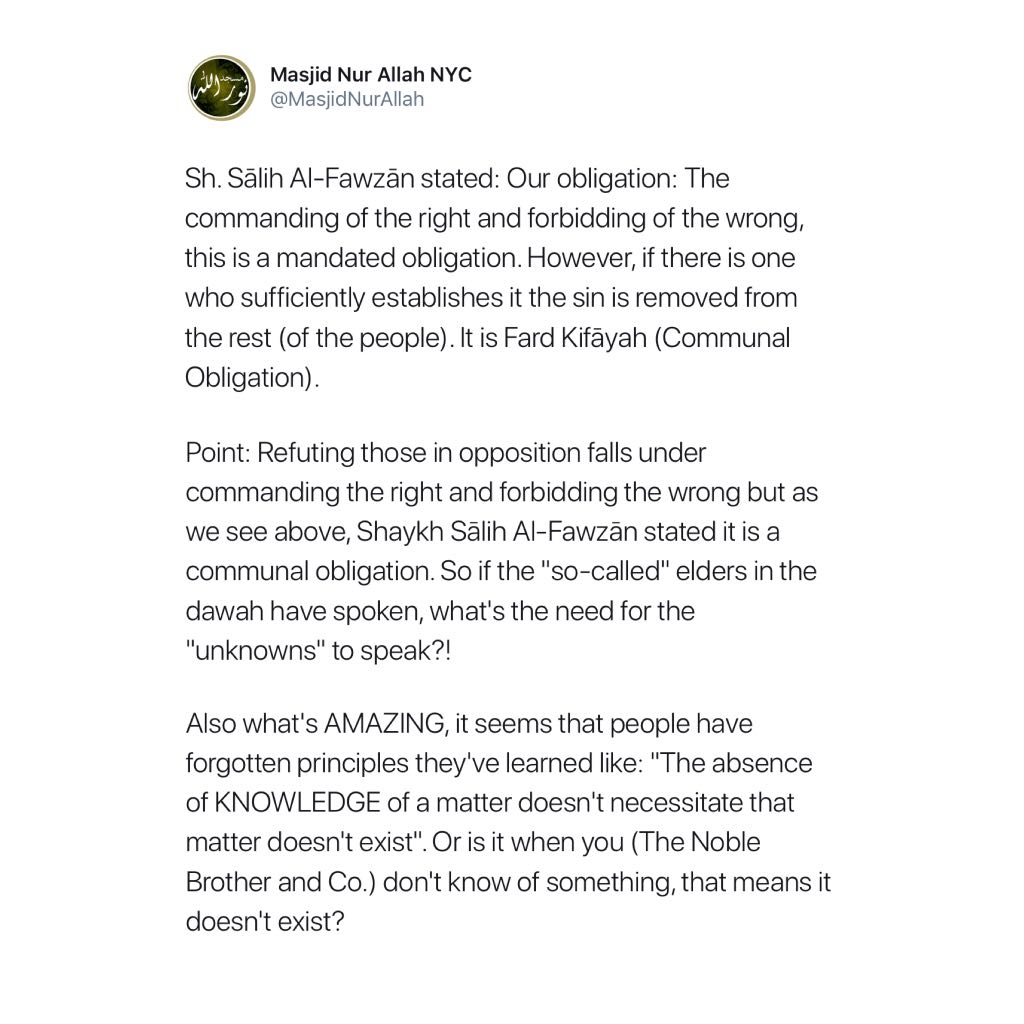 This was a direct response to a portion of a tweet from Anwar Wright, wherein the realities of certain occurrences were misrepresented in order to substantiate false accusations against several (unnamed) Salafi callers. The portion of his tweet addressed here is as follows:

I’m Amazed at a people that have the likes of Muftari Munir causing confusion in their own backyard (NYC) and we’ve yet to see one ilmi  refutation from them on him. Add to that no refutation from their زعيم who claims to “know Tahir better and longer than everyone else”. And the amazement doesn’t stop here…!

Although it is widely believed that Anwar’s speech was directed at Abu Yusuf Khaleefah, this conclusion is speculative due to the absence of any name being mentioned. There are several salafi callers within New York e.g. our two elders Dawud Adib and Abdur Ra’uf Shakir along with our brother Abu Yusuf. Thus keeping in accordance with the principle:

[There’s no attributing to one who remains silent (in an affair) a statement (clarifying his view and/or position), and silence in the time of need is a declaration (of one’s view/position)]

We will leave it to Anwar to make clear who it is he criticized in his speech.

Regardless of whether the criticism is directed towards all three or towards one among the three, it is explicitly clear that the basis of Anwar’s criticism is incorrect. This is made clear when contemplating on the following points extracted from this conversation:

Khaleefah clearly illustrates this by mentioning the ruling of enjoining good and prohibiting evil. It is a communal obligation and not an obligation made binding upon every individual. Thus Anwar’s amazement and criticism is not due to any violation of Islamic principles and guidelines, but rather it’s based solely on his own preference, and his preference bears no weight when compared to truth and guidance. Thus his criticism in reality is baseless.

Criticism is for the purpose of purifying the people. Often times it is a criticism of them (specifically) and other times it is a warning from their mistakes or their misguidance. These affairs Islam has brought forth prohibit the wealth, blood, and honor (of a Muslim). However the blood is permissible if the one whose blood is spilled is a taker of life (i.e. murderer, killer), or an adulterer, or one who has abandoned his religion (an apostate) and separated from the Muslim body/community. These things make permissible his blood.

Likewise, he who errs and/or goes astray losses his honor. Thus, that [caller’s condition] is made clear with the condition that the clarification is advice for Allah’s sake and that the one giving advice intents to clarify the truth and warn the Islamic Nation against falling into mistakes and misguidance. Hence the presence of these conditions are imperative. ]النقد منهج شرعي[

In light of this, Anwar’s amazement is deemed to be baseless, and nothing more than his imagination getting the better of him by way of whispers from the Shaytaan, as Anwar has done nothing here but give precedence to his preference and nothing more. Furthermore, if preference was a yardstick in this matter, wouldn’t it be more preferred that Anwar puts out something knowledge-based against Mufti Muneer? After all, Mufti did do a 3-part series against Anwar that - to my knowledge - he has not responded to to this very day. Thus one of three conclusions can be drawn concerning Anwar and his awareness of the rulings pertaining to enjoining good and prohibiting evil.

I would like to conclude by mentioning some important Fatwa by the Imam, Shaykh Abdul Aziz bin Baz. The Shaykh was asked about the ruling on commanding the good and forbidding by those charged with authority or those who are from the general people. Here is a portion of what he said in his lengthy reply:

.And in summary, commanding the good and forbidding the evil is a great affair and a holy obligation and a duty upon the Muslims; if those who are sufficient from (the people of) a land or town performs it, its obligation falls from the rest (of the Muslims). but if it’s not performed by those sufficient to do so, it becomes a duty upon the rest (of the Muslims) and they are sinful for leaving it off. Also, if you are in a locality, a town, a country, a masjid or a neighborhood where there is a manifest evil and it is not prohibited, it is upon you to prohibit it and not to be negligent in that, because perhaps there is no one other than you who can prohibit it and take your place…

Thus the first option is the least probable, and only Allah is well-acquainted with his reality as it relates to the last two options.

Sensationalism is the use of shocking or exciting stories or language at the expense of accuracy, in order to provoke public interest or excitement. This is exactly what Anwar utilizes in a cheap attempt to legitimize his non-issue. In reality, it is a twisting of truth, a fallacy, and an unsubstantiated claim that resembles a characteristic of hypocrisy of action. The Prophet ﷺ said:

From the four he ﷺ mentioned was: “When he disputes he is immoral.”

It is a turning away from the truth and using trickery/dupery to disprove the truth. It is quite often classified under the first characteristic (of hypocrisy of action) that being lying in speech/conversation.” This was done quite often in his declaration of amazement, especially in the portion pertaining to Shadeed (which will be addressed sooner than expected inshaa’llah), and likewise in the focal part of his speech being addressed now.

Anwar dishonestly said: “Add to that no refutation from their زعيم…” which he translated as ringleader suggesting that the previously mentioned brothers or one among them are flunkies, yes men, and lackeys to some personality. But none of the aforementioned brothers are known to be stooges to anyone, nor is anyone at Masjid Ahlul Hadith, nor the contributors to Salafy Ink. On the contrary this is an accusation that has been hurled at Anwar and his cohorts for years. As some honestly wonder if he were to disagree with Abu Khadeejah on a matter, what would his status in the crew be? This is pure sensationalism and nothing more, it’s a repulsive slander expected from a lowlife degenerate, not from a Islamic University graduate. Now that’s truly amazing.

A double standard is the application of different principles for the exact same circumstance, or in laymens’ terms, having a different rule for the same thing or circumstance. It’s two identical things and/or circumstances being measured with different standards or rules. Thus it is, in reality, a bias or prejudice for something (i.e. a person, group, organization, etc) that leads to unfair conduct in judgement. Thus whoever there is a bias held for, an excuse is always made and judgement concerning him/her is favorable. However he who is not looked at with that same sentiment, conduct and judgement of him is always negative.  Allah says:

O you who believe! Stand firm for Allah as just witnesses, and do not let enmity and hatred ofa people prevent you from justice. Be just as that is nearer to piety…[Al-Ma’idah: 8]

Unfortunately Anwar and his cohorts are drowning in double standards and have been accused of such for years. Within his brief statement above is yet another example of such. Anwar said: “Add to that no refutation from their زعيم who claims to ‘know Tahir better and longer than everyone else.’ “ In this statement he mentions Tahir Wyatt and the absence of a refutation against him. Tahir is accused of speaking against salafis yet keeping quiet against the people of innovation. As a result Anwar and his cohorts have criticized, warned against, and ostracized him from their communities yet this same exact characteristic that Tahir is described with, fits Abu Muhammad Al Maghribi to the letter. Al Maghribi is not known to have - in the past - warned against or refuted any person from the people of innovation. On the contrary the only known warning he has ever made against anyone is Abu Abdis Salaam Al Juyaanee, a well known salafi caller.

So why question your imaginary best friend, O Anwar, whom you referred to as a ringleader, about a refutation against Tahir yet you don’t ask Al-Maghribi that? Where is his refutation against the people of innovation in his locality or in any locality of which he has been a resident? Why, while Maghribi was in Newark, was his dawah referred to by some salafis, as the love boat dawah? Anyone who is able to answer these questions truthfully will see that there’s a clear double standard.

Once again, he prefers that someone he does not think of favorably refute Tahir while he doesn’t mind for the one he does think of favorably to refute nobody except for salafis, which is the very claim levied against Tahir that justifies refutations against him. Now that’s the real joke Anwar.

In conclusion, when looking at the previously highlighted points, we see the childish nature of Anwar and the reality of his elementary scribbling found in the pitiful tweet. As Anwar has done nothing more than expose the fact that he holds animosity for salafis over non-issues and encourages others with the same by utilization of deception. The remainder of his tweet will face the same scrutiny to illustrate the reality of this individual and his lowly conduct by Allah’s permission, and with Him is success.